Dennis is a former managing partner of Patterson Law and provides leadership in the areas of commercial litigation, municipal law, employment law, aboriginal law and health law. He is actively involved in the legal and volunteer community, and in 2014 was named Community Service Award recipient by the CBA-NS Branch. Currently acting as Vice-President, Dennis takes over his new role on September 1, 2016. 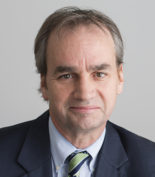